Thiruvathirai or Arudhra Darisanam  is a Hindu festival celebrated in Kerala and Tamil Nadu. Arudhra in Tamil means “sacred big wave”, using which this universe was created by Lord Shiva about 132 trillion years ago. In Tamilnadu, we make Kali, a sweet using rice and jaggery. But my mother-in-law, who is a keralite, makes kali differently using wheat flour and maida. Today I am posting the recipe of kali made by her. This tastes awesome. 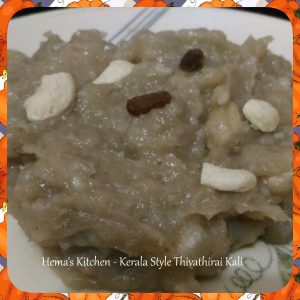