Bangalore, November 23, 2015: Get ready to laugh your heart out as Underdoggs Sports Bar and Grill lines up 2 of Bangalore city’s popular comedians- Aadar Malik and Vamsidhar B who will be performing at the outlet on November 27, 2015- 8.30 p.m onwards. Underdoggs exclusively brings comedy like never before in association with Indian Comedy Club, India’s first entity exclusively dedicated to comedy and Comedy Central India. While the holiday season is just around the corner, Aadar and Vamsidhar will make sure they set the vacation mood just right with their popular comic mimicry.

Aadar, who has been performing stand-up comedy since the past three years started his career on stage with theatre eight years ago. He has been performing Shakespearean plays since then. Vamsidhar on the other hand has been the winner of the RAW Comedy Festival at Bangalore and has even won the Red FM Stand up and Bajao contest. Gear up as Underdoggs Sports Bar & Grill promises to tickle your funny bones and leave you in splits!

Who: Aadar Malik & Vamsidhar B

About The Underdoggs Sports Bar and Grill

Underdoggs provides sporting fun with unique drinks and a fabulous food menu. The ambience is exhilarating and the essence of this lies in the sporty wall graphics, cricket helmet and skateboard lights, sporting memorabilia, the baseball bill holders and multitude of TV’s and gaming options. The place gives one a feeling of being right there among the sports icons.

As you soak in the ambience, games of all types — quiet, noisy or plain simple fun ones beckon you. There are 7 spic and span pool tables, dart boards, foosball, carrom, table tennis, X box Kinect, custom beer pong tables and multiple board games to choose from. Watching sport is a joy with 30 large fully HD TVs and projection screens placed at clever angles for complete viewing pleasure.

Each base captures the essence of a different sport, which range from a basketball, baseball, racing helmet, soccer ball, bowling ball or 8-ball to name a few. Topped with a flashy siren and chill snack that keeps your beer cold as ice for over an hour.

Giants on the Walls: The people you find on our spectacular monochrome walls are the ones we’ve dedicated our name to. Every sports person, who was considered nothing but who, by the sheer dint of perseverance, rose and shone, is up there telling a story. So even if you take a stroll at Underdoggs Sports Bar & Grill, Bengaluru we are certain.

The Mascot: The tortoise was chosen to represent the Underdoggs brand as the race between the tortoise is by far the most recognized underdog stories around the world. 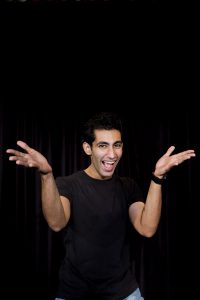 All Inclusive: We are that fun and acon place by day where anything goes – a game of table tennis, a round of Monopoly, flip flops and Bermudas, couch potatoing, or avid match watching. Come evening, the music heightens, the DJ spins it in, the games become intense and Underdoggs Sports Bar & Grill, Bengaluru becomes the kind of place where you kick up your heels or put on your glad rags for to make a night of it.

Aadar Malik is an actor performing major theatre productions all over the country. He is now part of the comedy ensemble SCHITZ-EN-GIGGLES, performing stand-up, improvised comedy and sketch shows in India and abroad. A trained musician and song writer, he prefers impressing women with his guitar 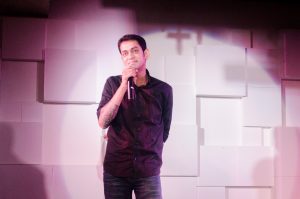 Tall, lanky and cranky. Markets himself as a stand-up comic and actor who markets lingerie. He’s a winner of the RAW Comedy Festival at Bangalore and Winner of the Red FM Stand up and Bajao contest. 34, unmarried and living with parents makes him the least eligible bachelor!

Introducing an eclectic mix of the best upcoming stand ups from across the comedy circuit!

Bravely touring where no comedian has toured before, here’s your chance to see the exciting new crop of comedic talent! It’s never been easier to enjoy a laugh the way it’s meant to be enjoyed – live, act after act, punchline after punchline!! You’ll be in hysterics when this previously unseen material comes to a stage near you!!!

Comedy Central in India is a localised version of Comedy Central which first began in the United States in the 1990s and in India on 23 January 2012. The channel’s programming concentrates solely on comedy. The English language comedy content programming with the options of the audio language feeds on direct-to-home (DTH). The channel airs a variety of comedy styles, including sitcoms, reality, classics and candid-camera.