Last week I got a mail from Sheraton Bangalore Hotel at Brigade Gateway to join on the Chettinad Food Festival at Feast. As I have stayed in Karaikudi, during my college times, I thought that I will give a try and see whether the taste is like that of Chettinad. So I accepted and went on 28-8-15, Friday. 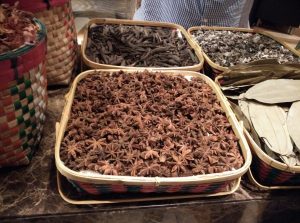 When I entered the place Sheraton itself, I saw the Different types of spices used in Chettinad Cusine. It was arranged and displayed wonderfully. With Thalaiatti Chettiar bommai and the display of spices, the place looked very nice.
Then, as I went to the place called Feast in Sheraton. As we enter the Feast, we can see the nice ambiance of the place with the look of Chettinad everywhere. 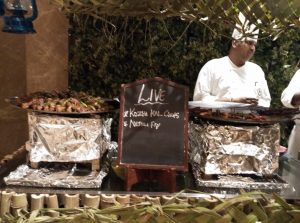 When we enter the place, I saw a live counter in which they were preparing some of the chettinad dishes live in front of us. The dishes they prepared live were Appam, Vegetable Stew, Kuzhi Paniaram, Adai and in non-vegetarian items they prepared Kozhi Kal Chops and Nethili Fry. 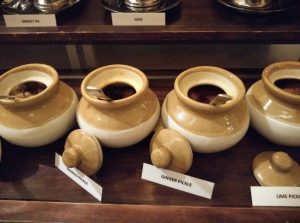 As I am a vegetarian I was thinking that there will be less variety of vegetarian food. To my surprise, I saw more variety of vegetarian food there. I saw lots of Vegetarian kuzhambus, curries and vadams and vathals. I also saw variety of podis like paruppu podi, Curry leaves podi, Idly podi and garlic podi. There were also lots of pickles displayed in the feast. With five types of salads, like sago salad, beetroot salad and pineapple salad the feast was very nice. There were also sundal salad, baby corn salad,etc. 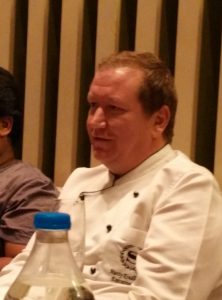 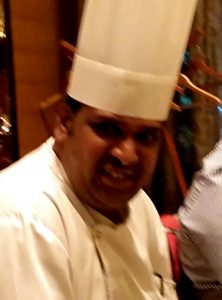 Then, we bloggers went and sat in a table allotted for us in the Sheraton. First, we got a welcome drink which was very nice. Then Chef Marti and Chef Shabri came and sat between us and started explaining about the chettinadu cusine and how they went there and how they learnt the recipes of chettinad from there itself. Chef Marty and Chef Shabri have personally visited Karaikudi, Chettinad and Pudukottai to explore the authenticity of the Chettinad Cuisine replicated the recipes in the Feast at Sheraton. 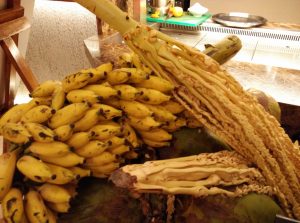 Chef Shabri told us that they first went to a place called Kariapatti near Thirumayam and stayed in a Chettiars house. He was telling us about the architecture of the houses there. The doors were made of teak wood. And the houses were looking very nice. They also told that how they learnt the recipes from there.
Then Chef Marty and Chef Shabri showed us the food in the display and how it is cooked in an authentic way. Then we all started having the dishes one by one. I was tasting each and every dishes and checking whether it was upto the mark. 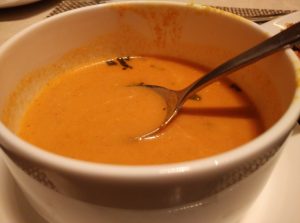 First, I took Chettinad tomato soup. When I took one sip of the soup I realised that there is a nice taste in the soup. The soup was awesome with the masalas and it was very tasty. I was very impressed with the soup itself.

The plain rice was not well cooked and it was undercooked. Ennai kathirikkai kuzhamu they made was nice. They had fried whole small purple brinjals in oil and added them in the usual kuzhambu we make at home in Tamilnadu. It was not upto the mark. Rasam was very nice and I liked it a lot. 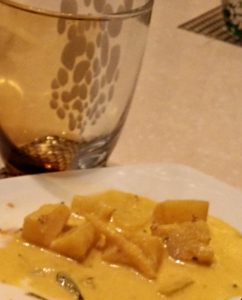 The next item I tasted was morkuzhambu with pineapple pieces in it. For me it was new. I haven’t seen anywhere using pineapple in making morkuzhambu. The taste of morkuzhamu was like that of the morkuzhambu we make at home and adding pineapple was a nice idea. I liked that idea. I was thinking of trying like that in my home. It was very nice.

I also saw vegetable stew in the live counter. It was very tasty with mild flavours. But according to me it is not a chettinad dish. It is a Kerala dish which I make at home regularly. 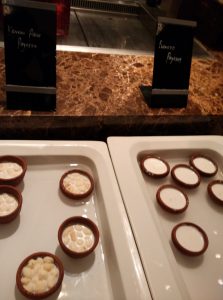 At last, I tasted the deserts Kavuni Arisi Payasam and Elaneer Payasam. Kavuni arisi is a special rice which they bought from karaikudi and Elaneer payasam means kheer made from tender coconut water. Both were very awesome.

In a whole the Feast of Chettinadu was very nice.

Rest of the pictures: 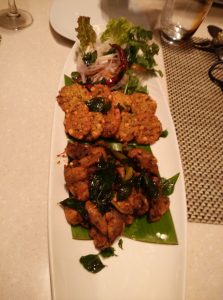 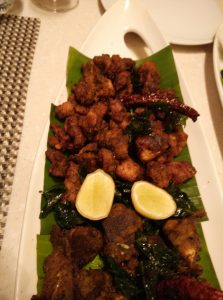 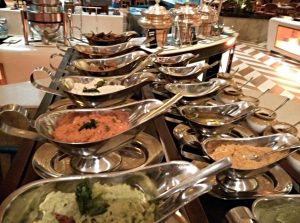 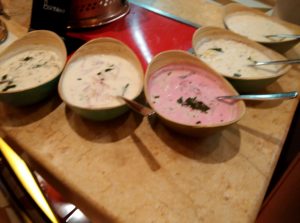 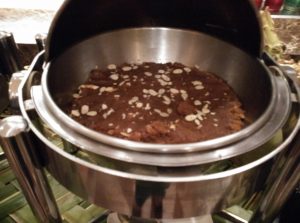 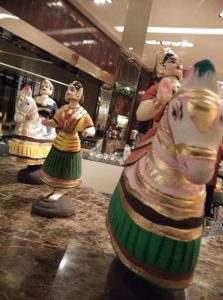